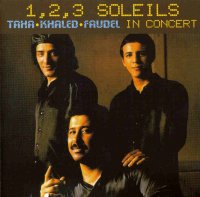 Khaled, Rachid Taha and Faudel are 3 of Algeria's most well known and well loved singers. Born in Algeria but now based in France, Khaled is known as the king of Rai. He was born Khaled Hadj Brahim in 1960 in Sidi-El-Houri. Along with Egyptian, Spanish and French music influences, Khaled also listened to the Beatles and James Brown as a child. With a blend of funk, reggae and Arabic music, Khaled soon pioneered the transformation of rai from a local style to worldwide popularity by adding a synthesizer and drum machine. Faudel came to prominence when at the age of 18, Universal offered him a 5 album deal. His debut album “Baida” then sold 300,000 records. He has one of the most beautiful voices to come out of the vibrant Algerian Rai tradition, his style an incredible homage to the great masters of this roots rebel music. Rachid Taha was born in the Gulf of Oran during the peak of the Independence War era. As a child, he moved to France with his family. Forming the group Carte de Sejour, Taha attempted to create a style of Arabic rock music heavily influenced by the Algerian rai sound. In 1990 he went solo, moving more into dance music.