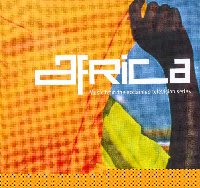 The Music contained in this CD is from the National Geographic Series called AFRICA. The most poignant tracks from the series have been included in this CD, representing the key emotions and atmosphere of the series. Taken from the 8 programs of the series, artists include some of the best African artists there are such as Ayub Ogada, Geoffrey Oryema, Rokia Traore and Ladysmith Black Mambazo to name but a few.

The series In eight hours of unprecedented filmmaking, National Geographic Television and Thirteen/WNET have joined forces with Tigress Productions to present a groundbreaking series on the untold history of a continent. The series is framed by Africa's dominant ecosystems, each of which has shaped its wildlife, its people, its history and culture in striking ways. Above all, this is a series about Africa seen through African eyes and at the heart of each show is a human story. These are intimate portraits of people whose lives highlight the unique part of the continent that they call home and intersect with its astounding array of wildlife. They are both thoroughly modern people -- and people who maintain ancient ways. It is through their perspective that we will come to know this most intriguing continentŖ and the way it shaped us all.