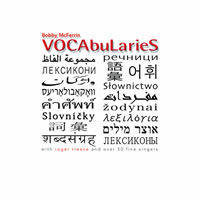 The seven songs that make up VOCAbuLarieS “keep the listener’s ear in a constant state of surprise,” says Roger Treece. Each song unfolds a kaleidoscopic perspective on Bobby’s irresistible vocal riffs. The lyrics offer a collage of Latin, Italian, Sanskrit, Zulu, Spanish, Russian, Hebrew, Portuguese, Mandarin, Japanese, French, Arabic, German, English, Gaelic as well as Bobby’s own invented language. In the song Ladeo, McFerrin sums up his musical philosophy. “Time for taking words away,” he sings, “the melody will tell the story as we go along.”

From the opening cry of Baby through the final notes of Brief Eternity, McFerrin, Treece and their virtual choir transport us to uncharted ground. It’s like arriving in an unfamiliar city that feels like home. This is a universal music that works on many levels. Every listener will hear something different in VOCAbuLarieS. “One song becomes a thousand songs,” Bobby sings. Within the seven songs of VOCAbuLarieS are many thousands of songs, each one a moving, wondrous, enveloping creation brimming with ecstasy, uplift and a sense of infinite possibility.