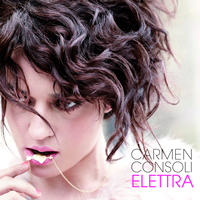 On 30th October 2009 after an absence of 3 years comes Carmen’s new studio album “Elettra” (Electra) which, as the title implies, is centred on women - all angles and aspects of the female universe. Elettra/Electra is a powerfully symbolic figure from Greek mythology (the one who avenged her father by conniving with her brother Orestes to kill their mother and their mother’s lover) with all the psychology that lies behind it. It’s an album about Love, and its complexes, love for one’s father, passionate love, incestuous love, love for sale etc etc. But it is also a way of denouncing the political strife that rules Italy – getting more and more like a Greek tragedy every day, says Carmen! One of the tracks was co-written with Franco Battiato, but the first single is “Non Molto Lontano da Qui” and the video is set in a 1920s/1930s brothel, where a customer partakes of the pleasures on offer, but comes to a bitter end when his own lust gets the better of him – a not so veiled comment about the life style of our politicians nowadays.

Musically and artistically speaking it has been hailed a jewel of an album, one of Carmen’s best, 10 new tracks spanning from traditional Mediterranean sounds to Anglo-American rock influences. She will be touring North America early next year – kicking off from Montreal on January 6th, Boston on January 7th, New York on January 8th. On release she held the # 1 position in the iTunes charts beating Michael Jackson – and held the # 2 position below Jackson in the physical sales charts for the first 2 weeks after release.