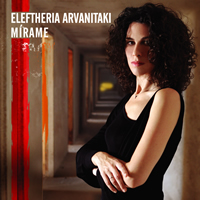 THE VOICE OF GREECE

“There is no doubt about it, the hot name internationally on the Greek music scene is Eleftheria Arvanitaki. Her voice has a clarity and emotional depth that registers whether or not you understand the words, and the music she sings has a lyricism and instrumental sophistication that sets it apart.”

Eleftheria’s vocal qualities and her ability to combine the traditional and contemporary music of Greece have inspired some of the most distinguished composers, lyricists, and poets of the day to write songs for her that are now considered ‘‘classics’’ in Greek music. All of her personal albums have gone platinum.

Her upcoming release named “Mírame” is a collaboration with the very famous and Grammy award Spanish composer and producer Javier Limon. The album, which combines a variety of sounds a rhythm from Greece, Spain and even Northern Africa, will be released in the UK in February.