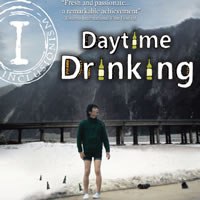 In Korea, there are rules for getting drunk... Rule 1 - ‘never refuse the first drink...’

In this offbeat comedy, regular guy Jin, dumped and heart-broken, leaves the city for a sorrow-drowning bender but ends up lost in the wintry rural provinces with no phone signal and no stores open. Abandoned by his friends, who were too hungover to join him, Jin lurches from one stranger’s offer of a drink to the next on a journey that leads to crossed-paths, misunderstandings, muggings and being left half-naked in the snow. Becoming more lost and drunk by the hour, Jin soon learns that things look different from the bottom of a bottle.

In the spirit of the classic roadmovie, and with an understated humour typical of films such as After Hours and Juno, Daytime Drinking has charmed international film festivals as an exciting example of truly independent film making.

This DVD also features two never-before-seen interviews with director Noh Young-Seok, as he explains the complex drinking culture behind the film.