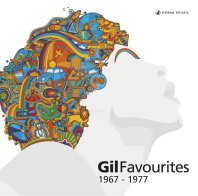 Gilberto Gil is the most renowned Brazilian artist. He was a key figure in the Bosa Nova movement (literally meaning “new wave” –a new music that blended together gentle Brazilian rhythms and melodies which infiltrated all over the world). Later, with his good friend Caetano Veloso, he began Tropicalismo, a musical movement that erupted in the late 60’s and marked the arrival of a new and extravagantly talented generation of musicians in Brazil. Gilberto Gil is also seen as being one of the pioneers in world music in that he fused samba, salsa and bossa nova with rock and folk music. “Favourites” celebrates this pivotal period in the history of Brazilian music and what is widely regards as Gil’s most creative period.