In The Name Of Love - Africa Celebrates U2

In The Name Of Love - Africa Celebrates U2 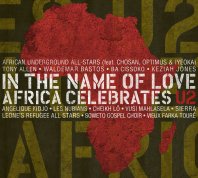 12 original interpretations of classic U2 hit songs and some of their more obscure material are featured on In The Name Of Love: Africa Celebrates U2. The songs are sung by 12 African musicians from 10 different countries, including two 2008 Grammy Award winners.

Produced by Shawn Amos and Paul Heck. Amos felt it was essential that African musicians unite and collectively share their voices of pride, accomplishment and appreciation for both their native country and icons like Bono who've substantially embraced many of the issues Africa faces.

The collection kicks off with Angelique Kidjo's powerful multilingual cover of , "Mysterious Ways". Aerosmith's Joe Perry joins Refugee All Stars for an upbeat, "Seconds", Malian blues star Vieux Farka Toure performs the Sahara Desert blues-influenced rendition of "Bullet The Blue Sky", Ba Cissoko contribute their version of the hit "Sunday Bloody Sunday", and The Soweto Gospel Choir's epic a cappella version of "Pride In The Name Of Love". Keziah Jones delivers a basement funky "One" and Tony Allen translates the driving "Where The Streets Have No Name" with his trademark Afrobeat rhythms.