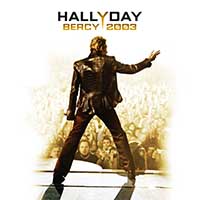 BERCY 2003 A New Live album, reclaimed after 17 years. A few days before Christmas, these four dates December 15,16,20 and 21 conclude the “Closer to you” tour in a magical atmosphere. Claimed by fans BERCY 2003 was the subject of a petition for publication. However. the release of the concert at the Parc des Princes, recorded in June 2003, had prevented it. Today this has been repaired and the public will be able to find Johnny Hallyday brilliant and finally relive on this unprecedented live album