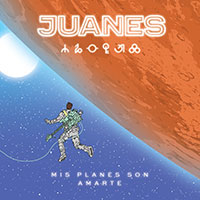 JUANES 'long awaited album, "Mis Planes Son Amarte", is the first visual album by a Latin American artist. It contains the 12 track album and and following the award-winning previous collaborations with Juanes, the film "Mis Planes Son Amarte" was directed by the multiple Latin Grammy Award winner, Kacho Lˇpez Mari. In addition, the film also includes the model of Victoria Secret, Joan Smalls; The last performance of the recently deceased Mexican actor Renato Lˇpez and numerous guest appearances as J Balvin, Jesse and Joy, Karol G, Piso 21, Fonseca and Kali Uchis, among others in that it contains music video for each track and will be released on May 19

On ôMis Planes Son Amarteö, Juanes combines his great fascination with space and his most mature composition to date, exploring our individual quest for lasting love. It is a love story that proposes life as an infinite cycle that repeats itself. Mis Planes Son Amarte is a robust and diverse album that represents a new creative stage [In the visual album], each song is a key piece within the narrative. Juanes has the hunger and tenacity of the days when he began his solo career, but maturity now characterizes his behaviour. With music that speaks for itself, but perfectly complemented by a visual album.á