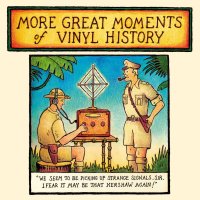 In 1987 Andy Kershaw assembled, from his personal collection, a splendid compilation of musical curios, rarities and downright oddities which he entitled 'Great Moments In Vinyl History'. This album, now long -deleted, was a great success and has itself become a much sought-after item. Now, seventeen years later, doubtless in a shameless attempt to cash in on this initial success he has put together a second volume. Thankfully this unseemly haste has in no way detracts from the overall quality of this new selection, most (though not all) of which has until now been largely unobtainable but which Andy has sought out and with typical enthusiasm he now wants to share. Kershaw has always been first and foremost a music fan - not for him rarity for raritys sake. Hence the presence among this somewhat arcane selection of Joe Tex's sublime 'Buying A Book' for, I suspect, no other reason than it is a damn fine track which sits rather comfortably inthis mixture of blues, folk, country and pop from all points of the compass, wonderful stuff.