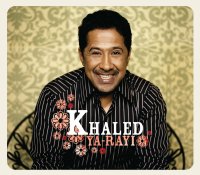 a rousing, exuberant expression of "passion by one of the great singers in the world today, at the height of his powers" Observer
After 5 successful albums, Khaled’s new record is a genuine “back to the roots” album. Khaled is coming back to the raď music essence, with charming Egyptian chords. He recorded a great chaâbi track H’mama with the Algerian national radio orchestra where Khaled pays hommage to the Algiers inhabitants and their folklore. The album contains 10 tracks, 1 track produced by Don Was (who already produced Didi & N’ssi N’ssi, 1 track by Jacob Desvarieux, 2 by Farid Aouameur young Algerian producer and the rest by Philippe Edel… In this record, Khaled invites us to discover or re-discover all the raď “magic” and carries you directly to a typical Algerian cabaret like the ones where he performed in his native city Oran at the beginning of his career in August 1985. It’s a matured Khaled that offers a roots and festive record, long awaited by the Algerian community as well as a wider audience that should make it his biggest success. Always with warm smile on his face, Khaled will celebrate his come back on stage from October 2004 !