Listen To Me - Buddy Holly 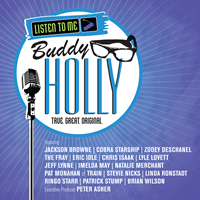 Buddy Holly is, of course, one of rock 'n' roll's true pioneers, the original "all-in-one songwriter."  In an era when most artists performed songs penned by leading songwriters of the day, Holly wrote and recorded his own uniquely personal material, establishing the creatively independent tradition that defines the genre.

Listen To Me: Buddy Holly features a remarkable line-up of artists paying tribute to the iconic work of an artist many consider to be the first true "singer/songwriter" performer of the rock 'n' roll era.  Among those contributing brand-new recordings to the collection are Stevie Nicks, Patrick Stump, Jeff Lynne, Natalie Merchant, Imelda May, Lyle Lovett, Jackson Browne, The Fray, Cobra Starship, Brian Wilson, Chris Isaak, Pat Monahan (of Train), Zooey Deschanel, Eric Idle, and the one and only Ringo Starr. The album will include the incomparable version of  "That'll Be The Day" recorded originally by Linda Ronstadt. The album is released to commemorate what would have been Buddy Holly's 75th Birthday.