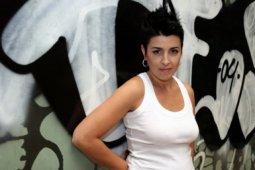 Amparo Sanchez, singer and founding member of Amparanoia, is often cited as the female Manu Chao. It's easy to see where the comparisons with her collaborator and long term friend come from, as like Chao she draws on a wide range of musical styles and influences to produce her bands distinct sound. Rock, reggae and latin are the predominant roots of Amparanoia's rhythmic foundation which provides an ideal backing for Amparo's socially conscious lyrics.

Born in Granada, Spain, in 1970, Amparo Sanchez joined her first band, the Correcaminos (Roadrunners) at 16. With Billie Holiday as her chief inspiration, her ability to sing blues, soul, rock, and jazz quickly established Sanchez as the foremost vocalist in the region.

Sanchez formed her next band, Amparo & the Gang in the early '90s and it was with this group that she had her first release, 'Haces Bien' in 1993.

After Amparo & The Gang broke up Sanchez wanted to escape being locked into the blues circuit and moved to Madrid. It was here she met Manu Chao and was introduced to various styles of Carribean music as well as absorbing Madrid's healthy Latin music scene.

By 1996, armed with her eclectic blend of influences, Sanchez formed the first line up of Amparanoia. Now as they release this their 5th album it is clear Amparanoia's sound has continued to evolve over recent years and doesn't appear to be stopping anytime soon.