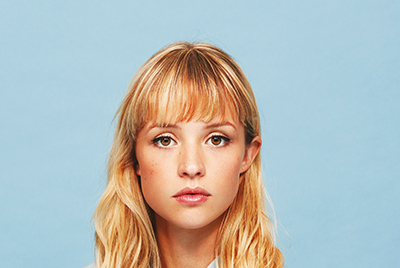 Angele, born Angele Van Laeken. The Belgian musician was this autumn's hottest name with her debut album Brol, a Belgian slang term that is particularly close to her heart. "I just wanted to have a Belgian word in my title, and this one always made me smile. Brol means mess or chaos, but it has a light, optimistic feel, it's not a negative word at all. The word reminds me of my childhood and my country. I find myself spending less and less time in Belgium, so it feels very comforting to me."

Over the past few years, the Internet has been churning out cookie-cutter Instagram stars, but Angele stands out from the crowds busy clogging up YouTube. At the tender age of 22, she struck out against the system, gently poking fun at the idea of fame and its trials and tribulations. An epitome of the age we live in, she transcends musical borders, throwing out the rulebook when it comes to style, image, social classes and ethnic groups, a bit like Brussels, Europe's pop capital: a more relaxed, less uptight version of Paris. This is the new breed of urban pop, in which identity, class, neighbourhoods and skin colour are irrelevant.

Angele is a bedroom music producer with an in-your-face 'Do It Yourself' emblazoned on her oversized sweater. She writes her own lyrics, creates her own sounds, and hones a graphic feel that mirrors her own personal style: hard-hitting and direct. Up-and-coming stylist Charlotte Abramow takes care of her image. Angele set up her own label (Angele VL) and single-handedly booked out the Trianon in May and November. She headlined at this summer's major festivals and made her debut appearance at the Olympia on 13 March 2019. This Linkebeek home girl is something special.

Born into a family of artists, Angele has music in the blood. After studying jazz, Angele began releasing covers of pop classics via Instagram and built up an incredible following. Free-spirited and independent, she goes against type time after time, sticking fingers up her nose and covering her hair in pasta. Her first three hits ('La Loi de Murphy', 'Je veux tes Yeux' and 'La Thune') serve as a refreshing introduction to her musical identity.

Angele's confidence and skill have seen her cover Dick Annegarn and invite her rapper brother Romeo Elvis to feature on her album ('Tout Oublier'). She was the only singer featured on Damso's last album ('Silence'), where she made her first ever guest appearance