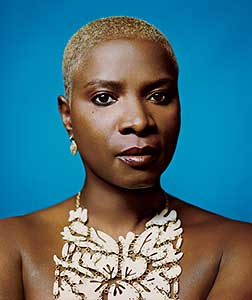 Angelique Kidjowas born in Benin. Her first performing experience was as a six year old actor-dancer in her mother's theatre troupe. From that point on, music became her sole passion. As a teenager, Kidjo was inspired to write songs by the sounds of Hendrix, Santana, Miriam Makeba, Fela Kuti, James Brown, the Beatles and Aretha Franklin; before her twentieth birthday she was one of Benin's few professional female vocalists. Difficulties with the political environment in her homeland, prompted Kidjo to relocate to Paris. Thriving in the city's African music underground, she progressed from singer of Jasper van' hof 's fusion band Pili Pili, to leader of her own band within five years. Established as one of Paris's top live acts, Kidjo was quickly discovered by Chris Blackwell and signed on Mango. Today, Angelique Kidjo is a bonafide global phenomenon whose performances are always legendary events

Her style of music varies from afro-funk, reggae, samba, salsa, gospel, jazz, Zairean rumba, souk and makossa which combined together creates her soulful unique sound of music. Wrasse Records have compiled with the help of Angelique Kidjo a best of album called KEEP ON MOVING - this album is the Best of all of her work, combining 5 of her albums. She has since released Ivory Soul on Sony Records.