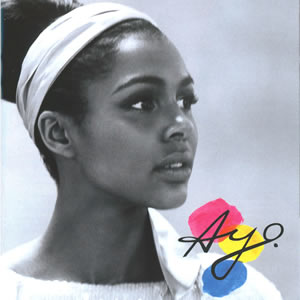 This second collection of songs continues the quality shown by its predecessor, with the hushed but powerful voice recorded with desire to capture the moment. ‘I didn’t have any specific reason for changing anything,’ Ayo explains, ‘Music remains my best therapy, and honesty is my flag.’

However, ‘Gravity At Last’ is more complex than it would appear. Rather than following the current obsession with “Reggae Folk”, Ayo opted for a more luxurious and orchestrated album. ‘This album is more rhythm-based, even if the voice and the guitar are kept at the forefront,’ explains the singer. From the African heat of ‘I Am Not Afraid,’ the aching blues of ‘Maybe’, the intense ballad ‘Better Days’, and to the gospel-style of ‘Thank You’, Ayo has widely-broadened her range of influences.

Though musically diverse, love remains the main lyrical-theme on the album. This subject offered Ayo the chance to write double meanings into many of her songs, with the singer excelling in detailing personal and intimate topics. ‘Many people will recognize themselves in my lyrics, because they have already had the same experience,’ describes Ayo. However, many of the subjects remain very personal, ‘A song such as ‘Lonely’ could easily be considered a love song, but it’s a song written on tour about my Dad, when I didn’t have any news from him for months.’

This level of thought is also apparent when Ayo explains her meaning behind the album title, ‘Gravity At Last’. ‘The Gravity I’m referring to is musical, as my sound is heavier now. But this also relates to the maturity of a girl who became a woman by becoming a mother. My social role has evolved as I’m now not only my parents’ child, but a parent with a child, a head of a family. Many things have changed in my life these last two years; now I’m more mature, more adult, and am able to understand things I didn’t get before. Becoming a mum changed my perspectives.’

Family and home are the one of the cores of this new album, with Ayo only too aware that such a life is no fairytale. All the episodes, the gigs, success, and happy or unhappy emotions that she has been part of or experienced over the past two years, have deeply moved the singer and been channelled into her most recent work.

Her first single, ‘Slow Slow (Run, Run)’, was originally named ‘Run Run’, and helps to demonstrate how she is adapting to the speed at which her level of fame is rising. Ayo explains this sentiment, ‘The title of this album also refers to a feeling of relief. ‘At Last’ indicates that I’m happy to be untroubled today, that I feel stronger and more confident now that I have left my past behind.’

Avaliable to buy now from Wrasse Records at Ł8.99