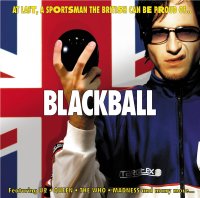 A film directed by Mel Smith, Blackball stars Paul Kaye and Johnny Vegas.
Set in England, the film tells of Cliff Starkey, a handsome rogue, who cannot keep out of trouble. Nothing, except bowls, inspires him in his coastal home town. The film tells Cliff's story of rise and fall from local bowls to national sporting sensation on the stage of world lawn bowls. The film was inspired by the story of Griff Sanders, who received a nationwide ban from lawn bowling games, due to swearing This hilarious and life affirming new British comedy is a classic tale of triumph over adversity that will quite literally bowl you over! The soundtrack featuring Madness, U2, Doves, Queen and Who is the perfect accompaniment to the film.
DVD and Video will be out in February 04