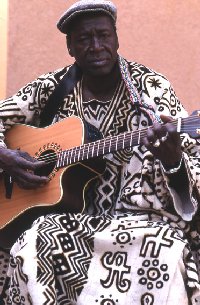 Boubacar Traore is one of the best known African Blues artists. Born in Mali,he began to compose music at an early age, influenced by American blues and kassonké, a traditional music style from his area. In the early 1960s, Mali won its independence and the people of Mali awoke each morning to the sound of Kar Kar's melancholic voice on the radio which sang of independence. Every person in Mali from his generation remembers having danced to his hits "Kar Kar Madison” and "Mali Twist”. However,as his family responsibilities grew, music took a backseat to money.After a twenty-year absence from the stage, in 1987, Boubacar Traoré was invited to perform for Malian TV and many people couldn't believe their eyes.
Two years later, life took a tragic turn when Boubacar's wife, Pierrette, died. Heartbroken, Kar Kar left Mali to work in France. Tracked down, he was brought to England, and recorded his first CD. Now he's more alive than he's ever been, playing in Mali, Africa and Europe.