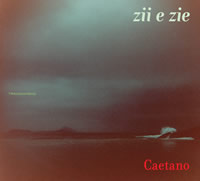 CAETANO VELOSO, dubbed
“one of the greatest songwriters of the century” The New York Times,
is among the most influential and beloved artists to emerge from Brazil. Since the 1960’s, Veloso has made more than thirty recordings to date and has developed a massive international following.

Absorbing musical and aesthetic ideas from diverse sources, Caetano, together with Gilberto Gil, Gal Costa and a number of other poets and intellectuals, founded “Tropicalismo”. Now universally credited with redefining what is known as Brazilian music, it laid the groundwork for a renaissance of Brazilian popular music both at home and abroad. Although Tropicalismo set the tone for Caetano’s career, his music has evolved greatly over the years.

Incorporating elements of rock, reggae, fado, tango, samba and rap-- with lyrics containing some of the best poetry in a musical tradition rich in verse-- Caetano’s music is sometimes traditional, sometimes contemporary, often hybrid. At once an astute social commentator and balladeer of highly emotive love songs, Caetano is one of the most respected and successful Brazilian artist of all time.