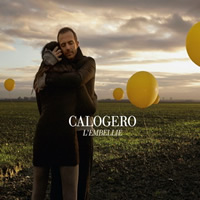 I wanted to call my fifth album “The Clearing” because I wanted to make it open and luminous. The clearing is this light which points to a far off landscape. The Cover Art is by Ellen Kooi, Dutch artist. After collaboration with Zazie, I wanted to contact authors with whom I had not worked yet. I was accustomed to entrusting my music to the authors by letting them propose subjects to me.

I have appreciated Dominique A for a long time. His lyrics, his music, his voice, the artist touches me. Knowing his work well, I contacted him because I was almost certain that our two universes could collaborate. He wrote three of the track lyrics on the album of which “La Fin De La Fin Du Monde” is one of my favourites. It is a song of hope, restarting after chaos. The rate/rhythm is bold, inspired from the traditional ‘Tarentelle Sicilian’. It is a heroic walk, a walk ahead.

As I had never covered the subject of the friendship (in a broad sense of the term) in song. Jean-Jacques Goldman, accurately re-transcribed what I feel in life. “It is known that I am rich only of my friends”.

I am rather proud of this music which evokes the westerns by “Sergio Leone”. I immediately wanted to write this track with Grand Corps Malade. Their vocal sounds could be in opposition yet also become complementary to mine, as ‘shade and light’.

The First track authored by myself, because I was the only one able to write this one.

Pierre Lapointe is a Québécois artist whom I find moving and funny at the same time. One morning, I planned to contact him to ask him for lyrics. The same day, he preceded me and proposed some lyrics. More than one sign that we had to work together, it had become obvious.

I initially received the lyrics off Dominique before I composed the music on my piano. The “orchestral” color of this song quickly seemed to me a neccesity.

Last Christmas eve, my brother Gioacchino had composed a melody on a small red toy piano, the melody of which I had recorded. One year later, I received the first lyrics from Dominique with whom I composed the verses. For the refrain, I used the melody created on the small piano. It is not always the case with my music, but this song was made in less than one hour.

I had never made songs with my friend Marc Lavoine before. One day, he proposed to me to go to meet autistic children and adolescents, who write in a newspaper: “le papotin”. Following this meeting, I asked Marc to write lyrics on this subject, while placing the perspective not from the parent but rather of that of the child. The music is a loop which turns, and builds up until the final explosion. It is the only song of the album which I sang into 1 only take.

Between Dick Annegarn and me, it is an old history. I often listened to his songs, I took again “Brussels” at the time of my concerts and I knew that he had appreciated my version of “Attila Joseph”, a tribute which was devoted to him. I thus sent this melody to him. I learned much with him because he works like a lyrical goldsmith. My friend Stanislas came to make the choruses.

I wanted to sing a title for my daughters, a merry song. Dick Annegarn observed, and wrote what he saw. “In my life two birds” two birds sing which make the choruses on this song. Perfect.

My brother Gioacchino is a rich melodic composer. He still shows it with this music. This songs Lyricism and its rhythmic structure are very intense. One needed a topic, a hero with infamy, the Dracula tale was ideal, just like the obviousness to sing this Italian title. Piro Pelů, the former singer of the Italian rock'n'roll group ‘Litfiba’, took the lead to tell the impossible loves of Dracula…

This music was inspired to me by the lead guitar of Olivier Marly. Kent is the author and a singer with whom I wanted to work. I am delighted that the meaning of the song gives its name to this album.