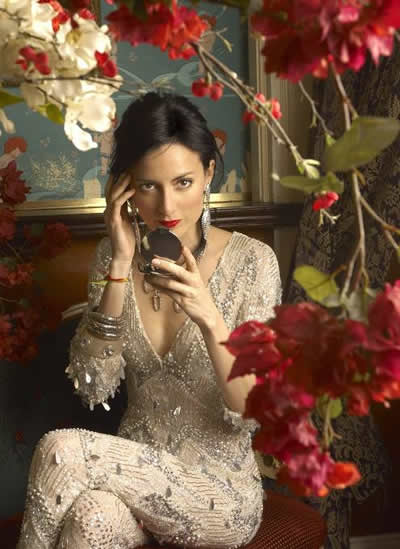 The co-founder and principal vocalist of New York's highly-acclaimed Latin funk collective Yerba Buena, Cucu Diamantes will be releasing her solo debut album – CUCULAND on March 8th 2010. With Yerba Buena, Diamantes was instrumental in the creation of a unique and critically hailed new sound fusing African Rhythm, the Latin/tropical sound of the Caribbean and the urban grit of New York. Boasting a previously unimagined blend of Afro-Cuban funk, hip-hop, salsa, nuyorican boogaloo and so much more, Interview Magazine called Yerba Buena "the future sound of Afro-Latin Urban America", while VIBE declared "Yerba Buena is one of the most exciting bands to hit the Latin music scene in years" and the New York Times hailed the group as "a musicologist's dream.. a joyful, ever-evolving, border-hopping groove." With Diamantes functioning as one of the group's primary vocalists and songwriters, Yerba Buena went on to garner a GRAMMY nomination and perform by request alongside artists ranging from The Dave Matthews to Juanes, and Ray Charles to Celia Cruz (in her last ever-New York concert).

Now, with the March 8th release of the cabaret-inspired CUCULAND, she will be able to display the full-range of her unique and irresistible multi-cultural mix of old-school Cuban glamour and rhythm fused with a distinct element of New York’s downtown music and arts scene. The songs of CUCULAND find Diamantes extending the beloved sound of Yerba Buena with much more lyrically personal songs tackling the challenges and triumphs of her life experience, her reinventions and her relationships. A combination of non-stop, rhythmic Latin energy, cinematic drama and feminine strength, CUCULAND will become an anthemic album of both style and substance for women everywhere. In advance of the album's release, look for Diamantes to perform at the 2009 Latino Inaugural Gala-joining artists such as Marc Anthony, Alejandro Sanz, Paulina Rubio & more.