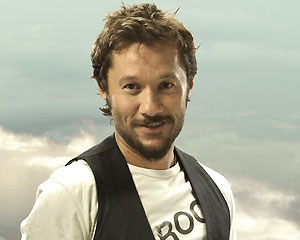 Diego Torres was born March 9, 1971 in Buenos Aires, Argentina. Diego added his talent and charisma to the influence of an environment marked by a legend (his mother is the legendary Lolita Torre) As an adolescent he formed a band called "a Marca". In 1989 parallel to his first music project, Diego began acting in Television however he didn't let that distract him from his work with the band. In 1991, the band "La Marca" came to an end after two years of intense work. Diego then realized that music and performing on stage was definitely his thing. Although he received many offers for acting, Diego continued with his plans in music. In 1992, he published his first solo album "Diego Torres" , under the artistic production of Cachorro Lopez. With this debut album Diego affirmed his quality as a singer. It was not necessary to wait for other albums to prove his success. Within a few months sales for the album had reached (and exceeded) Triple Platinum in Argentina. A tour in Argentina confirmed that his intuition in following his music career had not failed him. Two years later, along with Cachorro Lopez, Diego publishes his second album "Tratar de Estar Major". Following the esthetics of his first album, this new album combined different rythms and styles like reggae, ballads and funk, always a good combination for good storytelling. Diego turned out to be the Argentinean artist with the most sales and most recognition during the years 1994 and 1995. "Tratar de estar major" sold almost half a million copies solely in Argentina y many more in North and South America. In 1996, Diego prepared his 3rd album, this time with the renowned Italian produced Celso Valli (Jovanotti, Eros Ramazzotti, Mina, among others. Most of the songs on the album were composed by Diego himself, along with Danny Tomas and Marcelo Wengrosky. The album had excelling participation from the group Ketama, on the song "Alba" by Antonio Flores and the vocal participation of Quino (singer from Big Mountain) on "Siempre hay un Camino". As a bonus track, the album included Diego’s personal version of the song "Penelope". The version was created months prior for the homage album to Joan Manuel Serrat, which positioned Diego as an artist with International projection. While alternating his tour of "Luna Nueva" nationally in Argentina and Internationally, he was preparing the content of his next album and participating in two important films as lead actor, in Argentina. “La Furia” in 1998 and "La Venganza"” in 1999. Once he finalized promoting his two successful movies, Diego got together yet again with Cachorro Lopez to work on a new album "Tal Cual Es".