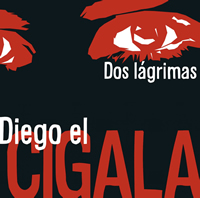 
In a flash of inspiration he jumps out of bed at night, calls his musicians, and goes back to sing a song that has not been completely finished and which is calling to him. Songs are like that, they call you at any time of the day or night, and El Cigala answers. He’s a man who’s summoned by sleep and by life, but when the song says “Come!”, he drops everything and goes after it.

It was always like that when he was a boy – why should it be any different now? This recording, Dos lįgrimas (Two Tears), results from the passion with which his first recording, Lįgrimas negras (Black Tears) with Bebo Valdés, became not only a bestselling CD known throughout the world, but also a disc that allowed many people to rediscover the feeling of listening. It was an existing song, a well-known song from the universal memory of boleros. But El Cigala added salt to these tears, an extrasomething never introduced by anyone before; and the music, and Bebo’s piano-playing, added not only salt but also pepper and the ingredients for a version that now seems like an inner symbol of sadness.

Now we have Dos lįgrimas. El Cigala has worked on it like some one training to walk to the moon, and in this house, where he puts on a video of how it was made, we can see, at a superficial level, this effort, and on another, very profound level, the emotional toll of completing it. And, behind it all, the dedication. He wanted to dedicate it to Isabel Polanco, the producer and Santillana’s chosen adviser, who died aged 51 on 28 March 2008. She was fanatical about his music, listening to it in the studio, at home and at parties like someone who is hearing the story of her life, and El Cigala often witnessed this deep emotion and sought to respond to it by singing as if for her alone. Two tears.

Just when he picks up on the need to eat lunch, his great friend Gabriel Garcķa Mįrquez calls him on the phone, and he tells him how the recording is going, for whom he’s making it and how he’s doing it, and Gabo, who’s been listening intently and laughing along with El Cigala for the sheer pleasure of communicating together, signs off by saying: “This is the hap piest call this tele phone has had in a long time.”

How did it all begin, Cigala?
With my relationship with Cuba and Cuban music – there’s no doubt it all began when I heard and saw Bebo performing Lįgrimas negras (resulting in the CD Lįgrimas negras), with Cachao, in Fernando Trueba’s documentary Calle 54. The seed was sown and I was bound forever to Cuba. I travelled to Havana for the first time in 2003 to perform Lįgrimas negras with Chucho Valdés in the Festival Cubadisco at the Karl Marx Theatre. That’s when I discovered the Cuban people, when I realized they had a great deal in common with the gypsies, in their way of life, the way they feel things, with problems coming at them from all sides. Music is their charm, and their purest mode of expression.

A musical people.
Yes, it made a big impression on me that people slept on the doorstep of the Karl Marx to buy a ticket (very expensive for the Cubans, at least a month or two’s earnings), although I wasn’t paid anything and the concert’s expenses were met by the Spanish Per forming Rights Society. Bebo never went back to Cuba, but I established a very special bond. I learned a lot. I came across new material which is now on this recording, like Dos cruces (Two Crosses), which Tata Güines and Changuito sang to me.


It was chance, then, that you met Guillermo Rubalcaba. Chance. Picasso said it, and you quote him. You have to be there, working, for chance to happen.
Yes, you have to be there. “I don’t seek, I find” – isn’t that what Picasso said? And that the muses are there, but they have to catch you at work. I was there, in Berlin, working and enjoying getting to know the man, who’s more than 80 years old. Rubal caba lived the Cuba of the 1950s, with the sound of that fantastically rich musical era, the sound I was looking for. The younger pianists of the 60s and beyond are more influenced by jazz.

How would you describe it?
Well, I’m not one for defining concepts. Musically the Cubans already understood perfectly what I was looking for. It’s been a natural progression for me since Lįgrimas negras, I’ve almost five years’ experience in this now.That’s what counts, isn’t it? Those years of investment in this field without deserting fla menco, but the experience has been tremendous, not as in Lįgrimas negras, when I didn’t know how to sing in key, I knew nothing and had no experience, I’d never sung with piano accompaniment and even less in those rhythms. I didn’t know what a guaguancó was or a danzón. I drifted along intuitively. Now I’m much freer.

And Rubalcaba plays the piano brilliantly.
Well, Guillermo was the original. He got rid of all those old sounds, the smell of age-old rum. I always try to immerse myself in legendary figures, like Rubalcaba or Changuito and Tata Güines, “El rey del tambor” (The King of the Drum), who’s with us more than ever through what we remember of him, like Juana Bacallao or Cachao. Just seeing them at my side talking to one another, discussing and chatting about what would work best for me, what wouldn’t work, you know? Seeing them inspired me and filled me with calm. Though I also like to work with young talent, in fact, the basic line-up of my band is Yelsy Heredia, from Cuba, whom I want to thank for being a bridge between Cuban music and flamenco, and Sabś Suįrez Escobar, from the Porrina dynasty, who has been the architect of the percussion, both flamenco and Cuban, all through the disc; my guitarist El Morao, who contributed his wonderful solo on the melody of Dos gardenias, and Jumitus.

This recording is like you’re making a homage to a town, some people, a past.
That’s right. Take for example Compromiso, listen to what it says: Reproaches, commitments “. . . if you’re the sail, I’m the wind, if you’re the river-bed, I’m the river, if you’re the wound . . .”

“. . . I hurt.”
It reflects life, you find things in songs that say just what you’d like to say: “If you’re the wound, I hurt.” It just happened, it had to be on Dos lįgrimas. This is how it happened: I was watching a film in the early hours, a really strong film, La noche de los girasoles (The Night of the Sunflowers), and there was an abuser, and a sequence with the song “We didn’t sign a document, or reach a formal agreement . . .”. The next day I phoned the studio to say we just have to include that song, and Reinaldo Creagh has to sing it.

So the recording is beginning to take shape.
That’s right. I have to make sure that the songs are in the right key for me. If it’s a melody in a minor key, that’s easily adapted to flamenco. And you listen to the melody and say: “That’s flamenco.” And it comes together. And when I was in Berlin, there was Reinaldo, a 90-year-old man, singing Dos gardenias with Rubalcaba if anyone’s going to share that melody with me, I said to myself, it’s that 90-year-old.

How did the rest of the recording take shape?
I approached Marķa de la O feeling low. I couldn’t get hold of it. I don’t know whether it was because I’d heard it sung by other singers, such as Miguel de Molina or Lola Flores, who had made very beautiful versions. We took it slower, then even slower. I sang it I don’t know how many times, until one day: I got to the studio, I was singing another song, and suddenly it came to me how I had to do Marķa de la O. I shouted across to my sound technician Alvaro: “Open up the track for Marķa de la O!”, and it was precisely at the moment it happened, when I was alone in the studio. The answer was to take down the rhythm we had, raise the pitch a semitone, and I became involved in the tragedy of this woman who became a story, a novel.

What happened with Bravo?
A really complex song. Everyone told me to leave it out, but there was something inside me that kept saying: “Don’t leave it out.” First, because I’d listened to it from when I was a boy, and then because I heard Bambino sing it, as a bulerķa dance.

Caruso is another demanding song.
We weren’t sure how to go about it, until I found the answer in a tango rhythm. How awful! Caruso turned into an Argentinian tango. All we needed was the bandoneón, and a great player, of course. Along came Richard Galliano, who made it his on the first take.

These songs have so much to say.
They say a lot to me. And if they don’t . . . I’m lost. When I’m singing, I’m listening, totally engaged, feeling everything . . . And when I feel it’s all gone perfectly, that’s pure happiness.

A miracle.
That’s music for you. Music is miraculous: it touches the heart, raises the sick. You know what Bebo told me? “I keep on going, Diego, I go on living, thanks to music.”

And so do you.
Yes, me too. Without music, I’d be nothing.

Quite a risk, including Dos cruces on the recording.
Yes it was. Changuito sang it to me in Cuba. And it came to me in a moment. When I sang it three or four months ago in the Teatro de la Maestranza in Seville, I was there with Rubalcaba, Changuito and Tata Güines, and we began: “It had to be Seville, with its silvery moon.” That was amazing, and we still hadn’t recorded it. I rehearsed in the green room. At the sound test I said: “Let’s see how Dos cruces goes.” But then we had a better idea: “In front of an audience – that’s where you let go of everything.” And it was a baptism of fire, right there in Seville – it had to be Seville. Curro Romero came to see me after: “It was like hearing Dos cruces forthe very first time! Like when my mother sang it to me!” Juanito Valderrama, may he rest in peace, once talked to me about Dos cruces, and what he said was: “Pay attention to every detail, explore everything, explore the cuplés, and you may find some wonderful things.” And I think that was the baptism of fire for Dos cruces.

What does the song tell you?
It tells me Seville, it tells me truth. And great happiness, that’s what I say to you: Seville, Seville.