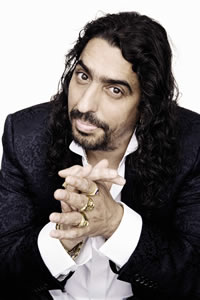 "Diego has one of the most beautiful flamenco voices of our time, a voice of sweetness that flows over everything. When I listen to him, it warms my heart." Paco De Lucia

Diego has worked on the follow up album 'Dos Lagrimas' ('Two Tears') with as much passion as training to walk on the moon. He has also dedicated the album to Isabel Polanco, the producer who died aged 51. She was fanatical about his music, and he often witnessed her listening to his music deep with emotion and sought to respond to it by singing as if for her alone hence the album being called "Two tears".

Like several other cantaores, El Cigala started singing in the street, and then performing as a background singer to artists. He has now been singing from the front since 1994, Diego has shown that he dominates the flamenco palos in the traditional style, and interprets them in a masterful and simple manner.