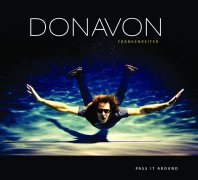 Pass It Around is Donavon Frankenreiter's new album. The CD boasts 10 new songs from the musician/pro-surfer, who has taken a fresh approch to songwriting on this, his third album.

The songs incorporate some of the acoustic and electric elements of his past recordings but infuse them with the musical wisdom he has gained along the way, this is added to by the production of two-time Grammy Award-winner Joe Chiccarelli (The White Stripes, Frank Zappa).

Donavon travels the world surfing and wanted to incorporate visions of the ocean, the surf and tide in his music. The result is an album filled with soulful melodies, uplifting grooves and some lessons for life. From the punchy mariachi horns of "Your Heart" to the pop sensibilities of "Life, Love & Laughter" to the laid-back funk of "Hit The Ground Running". Pass It Around is a testament to Donavon's continuing evolution as an artist.