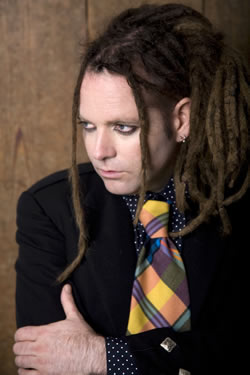 This is an album for sleepwalkers, skeletons and gravediggers, for those who have fallen so far down they can taste the soil between their teeth.

A more immediate and visceral collection than the previous multi platinum selling Songs From The Deep Forest, the new album's many moments of beauty and hope are juxtaposed with a dark, brooding edge- the trademark twist of the Duke.

Recorded between Wapping, London; Champaign, Illinois and Culleybackey, Northern Ireland, I Never Thought This Day Would Come was produced by long-time collaborator Paul Pilot and mixed by Nick Terry, best known for his work with the Klaxons and The Libertines.

In a deliberate attempt to push outwards, Duke Special undertook many writing collaborations for this album including sessions with Daniel Benjamin - drummer with German punk band Jumbo Jet, Paul Pilot, Phil Wilkinson and Bernard Butler. The wind, brass and percussion of the RTE Symphony Orchestra, under the stewardship of the inimitable David Brophy, add a swirling carnival flavour to the proceedings.

Since the release of Songs From The Deep Forest, Duke Special has toured sold out shows across Ireland, the UK and Europe. From headlining a packed-to-the-rafters Shepherds Bush Empire in London to stage diving at Electric Picnic, hosting five sell out nights back-to-back at Belfast's Empire Music Hall to appearing as a special guest performer at the Cannes Film Festival, Duke Special has come further than he ever imagined he might. Crowded House invited him along on their first tour in ten years, he gave a little known Welsh singer called Duffy her first ever shows, guested for the legendary Ray Davies in London and performed at The Irish Film Boards Oscar Wilde event in LA.

Duke Special's immense creative talents have seen him writing the theme tune for Sesame Tree - the Northern Ireland edition of Sesame Street - where he also got to sing with The Muppets in the final episode. He has hosted a night at the Belfast Film Festival where he performed as a puppet of himself. He recently created a night of song and theatre in the Spiegeltent for the Dublin Fringe Festival and performed his songs accompanied by a 60 piece strong RTE Symphony Orchestra at a sold out show in Dublin's National Concert Hall. The Duke also learned to swordfight for an upcoming on stage showdown with his long time nemesis, Neil Hannon.

In keeping with the dynamic and musically ambitious style of the Duke, the single is to be recorded live at London's infamous Metropolis Studio’s as part of their 60th Anniversary celebrations of the 7" format. A truly one-off experience, the process has been obsolete for over thirty years and this will be the first recording in this way since Thelma Houston's 'I've Got the Music in Me'. Duke Special and band have been invited to lay down four tracks including a version of the first ever 45rpm 7" vinyl disc 'Texarkarna Baby' by country and western singer Eddie Arnold, which was issued by RCA in the USA on March 31st 1949. Chuck Berry’s 'You Can't Catch Me' and new Duke Special track 'Monsters In The Dust' will also be recorded in front of a select live audience.