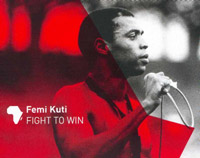 SORRY, THIS ALBUM HAS NOW BEEN DELETED**

It is three years since the release of Femi Kuti’s widely acclaimed debut album Shoki Shoki. An eternity for Nigeria, although as Femi says the country still resembles a supertanker sailing in pitch-black night towards a hurricane.It is against this uncertain context that the new Femi Kuti album "Fight To Win"appears, equipped with 12 tracks, like a spokesman for tomorrow yet to be decided however Femi has neither put away his distinctive sax nor softened his views - he has never been as incisive or precise . Featuring guest appearances from Money Mark, Mos Def and Common, "Fight To Win" is an album resolutely rooted in today’s Africa.