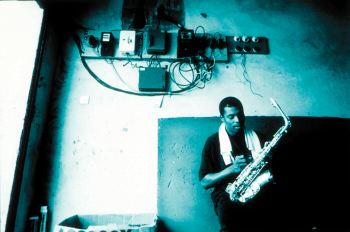 Femi Kuti Like father, like son. The undisputed inheritor of the genius of Nigerian Afro-beat superstar Fela Anikulapo-Kuti is his 37 year old son, Femi. Femi's version of Afro-beat is the most exciting new sound to emerge from Nigeria for years, borrowing the best elements from his father's powerfully polyrhythmic prototype: a funky, jazzy, heavily percussive sound that took James Brown's beat back to Africa. Femi adds to that winning formula the freshness and exuberance of young Lagos and its taste for the new R&B and dance music of America and Europe. Femi’s songs, averaging five to six minutes in length, differ from those of his father, whose hypnotic jams often topped thirty minutes each when recorded, stretching to over an hour when performed live. Writer David Hecht describes the musical similarities and differences of father and son in his July 28, 1999 New York Times article titled "A Son Builds on His Father’s Afro-Beat and Politics": Femi first rose to international prominence in 1985, when he appeared at the Hollywood Bowl, fronting Fela's forty piece band, Egypt 80. Fela had failed to make it onto the plane, having been arrested at Lagos airport and jailed on a trumped-up fraud charge. Femi, already a member of his father’s band, came to the rescue that night, giving a show that brought the audience at the packed Bowl to its feet. Even though the fans had paid to see and hear the charismatic Fela, Femi was able to fully satisfy them with the same rude, muscular sax style (soprano, alto, tenor and baritone) and lean self-confidence bordering on arrogance. Two years later, Femi had formed his own young band, The Positive Force, and released their debut album for Polygram Nigeria. Entitled No Cause for Alarm, the album was a raw but impressive mixture of funky soul-jazz, driving percussion and horns, with sharp social comment. Strong interest in this album prompted a dramatic debut appearance in Paris, where Femi's no-holds-barred show devastated a huge audience. He has since carried out numerous extensive European tours with critics inevitably but favorably comparing the big band sound of the sixteen member group with Fela's legendary Egypt 80. In 1994, Femi was signed by the legendary Motown label. An album, Wonder Wonder, was released in 1995, and was followed by a highly successful tour of the United States. Sadly, in August of 1997, Fela Anikulapo-Kuti died. Femi and his sister, Yeni, were appointed as Executors of Fela's estate. Another tragedy was to shake the Kuti family to their roots shortly afterward with the untimely death from cancer of Femi's younger sister, Sola. Together with Yeni, Sola was a founding member of The Positive Force and her presence will be greatly missed. Her place in the group was taken by Femi's wife, Funke, who has proved to be a gifted singer and dancer.