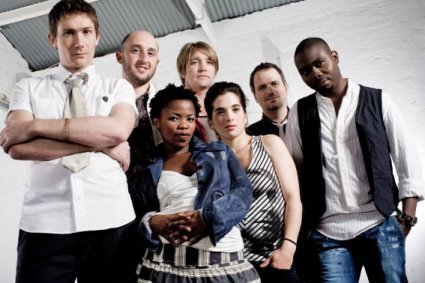 South Africa - The Rainbow Nation, sadly has few rainbow bands. Political segregation may have ended in 1994, but culturally, separation rules. However Freshlyground transcend this, striking a chord with everyone from infants to pensioners, regardless of colour or class.

Freshlyground formed in Cape Town, in 2002. A collabiration of South African, Mozambique and Zimbabwean musicians who show influences of their countrys traditional rythms but also with influences of blues, jazz and rock. Their career started when, after releasing their first album they gained a huge fanbase through playing at Harare International Festival of the Arts and the Robben Island African Festival. Their subsequent releases made them popular enough to play alongside legends such as Mariam Makeba, Femi Kuti, and Stanley Clarke.

Freshlyground's second album "Nomvula" went double platinum and gained enough international attention to secure them a deal to disribute their album to Europe. "Nomvula" and "Ma'Cheri" are both avaliable from Wrasse Records.

Led by Zo Mohola, a singer with a flair for the dramatic and a pure voice that tugs at the heart whether she is singing in English or the click-clicks of her native Xhosa, Freshlyground are set to conquer the UK as they have their homeland.