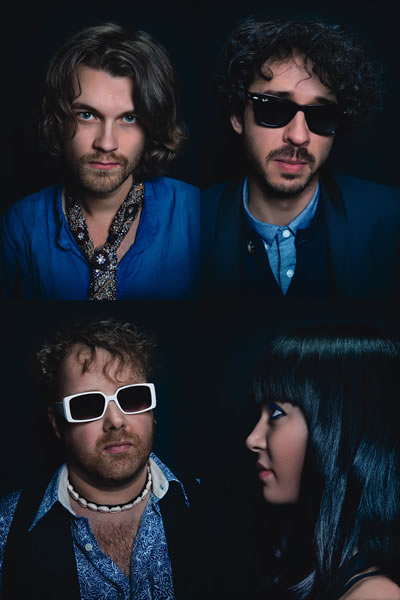 For the recording of their new album Walk The River Guillemots followed a tried and tested tradition when the four London-based urbanites retreated to the countryside, to Bryn Derwen studio, near Bethesda in deepest, greenest Snowdonia. "It's a very magical place," says singer and principal songwriter Fyfe Dangerfield. "To be able to step out of the control room and be in the middle of the woods, surrounded by mountains was special. And it really helped shape the sound of the record. We wanted to make something expansive – music to be heard across the night sky."

The quartet's third album since their formation in 2004, Walk The River is a collection as elemental, timeless and awe-inspiring as the surroundings in which it was created. The band describe it a series of feelings set to music. As Fyfe explains: "I had this recurring theme or image while writing these songs of someone coming into consciousness on a bare, empty planet and not knowing who or where they are but vaguely remembering that they had a home, and imbued by a sense of hope that they might one day return to it. The way I describe it makes it sound like a really bad prog record, but I can assure people it's not.."

Call it a concept album at your own peril then. Because if there's one thing we have learnt from Guillemots' colourful career to date, it's to expect the unexpected. For here is a band to whom it is never easy to attribute simple epithets. Here is a real musical anomaly; a major label quartet who rebuke musical convention, defy simple pigeon-holing and generally make reviewers' jobs difficult while still garnering endless critical acclaim. And always hitting the bullseye every time.

This time around Walk The River adheres to their grandest musical vision yet and the result is a cohesive whole that is bucolic-sounding one moment, stratospheric the next - evocative as Radiohead, colourful as a Disney soundtrack, widescreen as a lost psychedelic Righteous Brothers record. Check out the other-worldly title track and album opener, which transplants the choral beauty of Fleet Foxes to an altogether different celestial plane entirely, or lead single 'The Basket' which is a joyous rush of pure space-pop; simultaneously cerebral and visceral. Then there’s 'Vermillion', which morphs from a home-recorded demo into a throbbing, astral slice of Fleetwood-Mac-esque beauty, and 'Inside', which is less a song and more dreamy, circular riff recorded as night came in, walking through the Welsh wood, kicking its way through the leaves.

Walk The River was created after concerted, concentrated bursts of creativity which began in earnest in 2009 before Guillemots entered the studio the following year, with the songs near enough fully formed. "Bands nodding at each other while jamming, like 'Hey, great riff man!'- we loathe all that muso stuff," says Fyfe. "But we do love to get lost in what we're playing. That's how we write most of our songs .. lights off, eyes closed .. it's when you stop thinking about what you're playing, that's when it feels like something good is going on..."

It's the type of an album that can only be made by a set of friends who have been playing together for several years, Guillemots having formed back in 2004 after the classically-trained, Birmingham-born Fyfe relocated to London following a stint in John Peel-approved teenage band Senseless Prayer, subsequently meeting Scottish drummer Greig Stewart, Brazilian guitarist Magrao, and Chinese/Japanese/Canadian/British(!) double-bassist Aristazabal over the course of a couple of years.

Between the initial stages of this new album's inception two years ago and its completion in the slightly less idyllic setting of an industrial estate in Willesden, West London, last year Fyfe took time out to have an accidental but nevertheless bona fide stint as a Top 10 pop star. "Doing stuff outside of the band is healthy - even if just to help you appreciate all the more how amazing the band you have actually is," Fyfe explains. "I think in Guillemots we're known for using a lot of different sounds in our music, so when I had some time to myself to do some recording, I quite liked the challenge of aiming for real singer/songwriter simplicity: just voice, guitar, piano, maybe some drums."

He's referring to his 2010 debut solo album Fly Yellow Moon, (which reached No. 12) and the attendant single, an understated cover of Billy Joel's 'She's Always A Woman', which featured on an award-winning TV advert for John Lewis - the first advertising he has ever agreed to do, incidentally. The single subsequently reached No. 7. "A slightly surreal experience," grins Fyfe. "It briefly gave me a peek into a whole world of radio roadshows in front of screaming kids and drawing the balls on the National Lottery. Very strange; and not really me. I hate music snobs and I love performing but I can't quite put on the front that's required of a conventional pop star. But then again I got to communicate with Billy Joel, and if turns more people onto Guillemots..."

Fyfe is being modest of course, because Guillemots' music has always been a search for pop perfection of sorts – just not down the showy, glossy Lady Gaga route. And if his diversion into the mainstream was strange, it was far from unexpected - after all, Guillemots have a far-reaching fervent fanbase that helped push their Mercury-nominated 2006 debut Through The Windowpane into the Top 20 and eased 2008 follow-up Red into the Top 10. And all without the kind of hype and hooplah that seems required of any young British band these days. It may be a well-worn music biz cliche, but Guillemots' success genuinely has been completely organic.

And while they remain an unpredictable beast, Guillemots make music that works and moves on many levels, for many people. Walk The River looks set to cement their reputations as new national treasures.