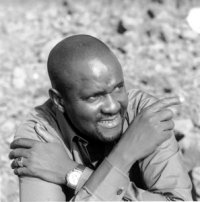 Ismael Lo was born into a Muslim family in Rufisque, Senegal, the son of a Senegalese father and Nigerian mother. His first few years were spent in Niger. His father had two wives and between them they had 18 children. Lo is the only one who became a musician. He loved music from an early age and got his start playing a homemade one-string guitar. Early American influences included Otis Redding, Wilson Pickett and Etta James, and he learned their songs by listening to the radio. At first he only played for the joy of it and never considered performing, but then an older brother, who owned a club, asked him to play on a local television show. Lo said no the first time, and continued to study decorating and painting at a trade school, but a few months later he reconsidered and appeared on the show. He was an instant hit and this inspired him to think about performing full-time. In 1979, a singer/songwriter invited him to play in a band, called Super Diamono a super group, , that played mbalax-blues. Lo, with his talent for guitar playing and song writing, quickly established himself as a key figure in the band and soon became the second lead singer, backup singer and rhythm guitarist. By the early '80s he found himself wanting to launch a solo career, but felt like he would leave a gaping hole in the band that could destroy it. In 1984, the pressure became too much and he left for Spain to do some painting. He began recording as a solo artist upon his return. Ismael Lo participates in creating an acute awareness of the hiv virus and the havoc it causes in Africa. He produced and acted in a mini-movie regarding the issue.

To date he remains actively involved in sensitising and informing Africa on the epidemic. Among his many talents besides singing are; painting, writing and acting.