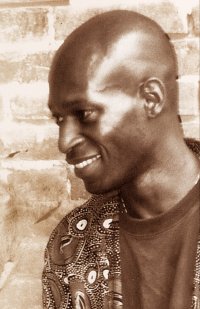 Few are the pioneering musicians who have managed to invent a whole new style or musical language, but how many have ever invented a new bona-fide verbal language?! Composer, singer, writer, poet and spiritualist Julien Jacob seems to have done exactly that. For him, the meaning of words and the pressure to understand them sometimes encumbers the impact of music. His own imaginary language, which is inspired by the timbre and vibration of words, is intended to release the listener and allow her or him to interpret the song in their own way. Born in Benin, west Africa, Jacob came to southern France at the age of four. After discovering rock and jazz in his youth, Jacob played in a pop-rock band called Anaphase before moving to Nice and pursuing growing interests in literature, poetry and spirituality. He hit the road and hung out with musical heroes like Fela Kuti, Miles Davies and Al Jarreau and then moved to Paris to develop his music. In the mid 1990s he finally settled in the unlikely location of Hennebont, a small town in Brittany where he wrote a series of books and a huge trove of songs. After teaming up with Breton producers and musical visionaries Ghislain Baran and Thierry Nedelec, Jacob recorded his first album 'Shanti' in the Breton port town of Lorient and released it at the end of the 1990s. His music is palpably African but also distinctly unlike any African music you've ever heard, full of original nuances, twists and the off-beat musings of a very rich imagination. Jacob's deep sonorous voice hits the G-spot too. Biography by Andy Morgan, July 2003