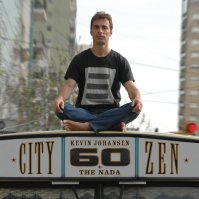 Kevin Johansen and his group The Nada's new album City Zen mixes his Argentinian and American roots - with songs sung in English and Spanish and combining traditional Latin music styles with American guitar based pop-rock.

Kevins songs are catchy, quirky and original. Deftly backed by The Nada - a line-up that includes flautist Andres “Cayo” Reboratti, Juan Alvarez on bass and vocals and 65-year-old “Zurdoą Enrique Roizner, a veteran of sessions with Piazolla and Vinicius De Moraes, on drums - Johansen recorded City Zen in the studios of Argentine rocker Leon Gieco, who also guests. Slipping effortlessly from English to Spanish, in a voice that swoops from chocolate baritone to almost Hindi-style heights, Johansen steers his crew through everything from up-tempo tango ballads to flute-and-drum-drenched jams.

Oh, and the title? “I guess City Zen refers to the challenges we all encounter when we live in a big urban centre and attempt to be somewhat relaxed,” says Johansen, who was into Buddhism way before it became en vogue. “Music helps you achieve a peaceful state of mind. And music,” he adds, smiling his laid-back smile, “is Zen to me.”

City Zen is an album to treasure.