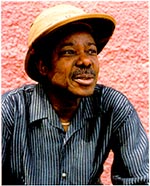 For 30 years King Sunny Ade has been thrilling audiences and listeners with dynamic live performances creative videos and innovative recordings.

Born in 1946, Oshogbo, Nigeria Ade dropped out of school in 1963 in order to play with Moses Olaiya & his Rhythm dandies, a Lagos juju band.

In 1966 he formed his first band the Green Spots, in 1974 he renamed the band the African Beats. By 1975, he felt sufficiently powerful and financially secure to set up his own label, Sunny Ade Records which was his main recording vehicle through 1990.

In 1982, Island Records signed Ade for Europe and North America (promoting him as 'the African Bob Marley'). The three albums were - Juju Music, Synchro System and Aura. When the artist and the label ultimately disagreed on the artist's future artistic direction, they parted ways amicably. For almost ten years, King Sunny Ade continued to release records and dominate the domestic music industry in Nigeria, while only vinyl imports trickled out to the rest of the world.In 1996 Ade signed a new deal with Atlantic Records subsidiary, Mesa/Bluemoon under which he released three records. E Dide / Get Up. Odu, and Seven Degrees North.

In January 2002, Ade completed a four year term as President of The Performing Musicians Assoc. of Nigeria (the national musicians union) Still performing weekly at a wide variety of parties and events, both public and private, King Sunny Ade intends to use his newly recaptured free time to focus on his music. With 111 albums to his credit already in Nigeria, African music fans can surely look forward to more great things to come. Juju Music Juju music is a music of broad social messages. Rooted in the ancient Yoruba tradition of conveying broad social and cultural messages. Musically it is a thrilling hybrid of Western pop and traditional African music that incorporates electric guitars and synthesisers with such indigenous instruments as talking drums.