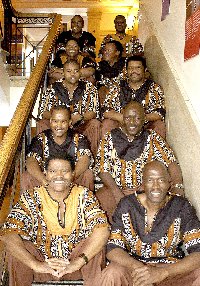 Ladysmith Black Mambazo first came together in the early 1960s under the gentle guidance of sweet-voiced Joseph Shabalala. His inspiration for the group came to him in a dream in which a choir of children sang and danced. Shabalala soon transferred that dream to real life when he formed Ladysmith Black Mambazo.

Ladysmith Black Mambazo is part of the time-honoured tradition of South African Zulu male choral music called isicathamiya (derived from the Zulu word meaning "to walk or step on one's toes lightly") The roots of isicathamiya goes back to the turn of the twentieth century when large groups of males left their homelands and families to find work and lived in all-male hostels in the cities and near the mines. These migrants didn't form football teams or the like, but instead turned towards singing as a means to stay close to their roots Ladysmith Black Mambazo released their first album in 1973. They have since produced over 30 albums since that time, including their collaboration on Paul Simon's "Graceland," in 1986. "Graceland" was one of the best selling albums of the eighties.
They have also sold over 1 million albums in the UK alone of their Star and the Wiseman album with the much loved Heinz commercial music Inkanyezi Nezazi