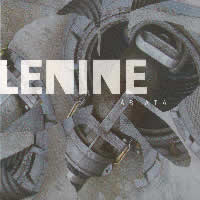 His songs have been recorded by Milton Nascimento, Sergio Mendes and even Dionne Warwick. Labiata is an orchid which Lenine loves, this specific one was chosen for its diverse nature ģ like Lenine's work, regional, pop, rock, samba, electronic, personal and universal, Lenine is a lot of things in just one package.

Labiata is the first studio album after 6 years and was conceived in the studio, ōI worked on the number during the night and then recorded it during the day".

The music of Lenine is International ¢ a sophisticated, expertly produced fusion of singer-songwriter tunes and ballads, rock, dance grooves and contemporary Brazilian influences as well as American.

Labiata demonstrates once again the freshness and versatility of LenineÆs compositions, and truly defines him as his fans already do as a genius.

TRACK BY TRACK BY LENINE


This track has something thatÆs always on my albums, the rhythmic measure, to sound more organic. ItÆs sort of autobiographical; as it is about the need for you to follow you own design and your own dreams, no matter what, not matter the cost. The Quinteto da ParaĒba helped me a lot to find the polyrhythm.


Ivan Santos is more than a partner! He is a great friend and poet who does great work. A real creator! The music was put together quite quickly. JR. got some rhythm going which was the best! There is no rhythm. ItÆs really quite tight. The thing is; when we were making a demo, I was wearing pants more suitable for cold weather ¢ quite thick. I got the rhythm scraping my nails up and down my pants. It was if you will, the thin sound we were looking for. I love these noises ¢ little noises that we use like with say tools and which can add a new element within the music.


I really love what Chico and NańŃo Zumbi do. They have revolutionized Brazilian music. IÆve known Chico a while but we have never been close. Last year, thanks to a friend we have in common, I was asked to meet with his sister, Goretti, in my home. She told me that just before the accident, Chico had come back from France and was on his honeymoon period ¢ he was in love! I sang a piece of music I was working on and which matched the mood then. Goretti opened the note- book of her brother. She asked me to work with him saying ōthis song has to be known all over the worldö. It was done so delicately and with such emotion that we went ahead. Samba e Leveza is dedicated to Goretti.


We began this song two albums back. I always keep things we end up not doing and by and by, pick them up again. ItÆs got something to do with the world, a sentiment I share with Lula, that is always on the edge. A world which was always arithmetic and is now a geometric progression. Everything is moving along quite quickly and appetites are growing. The lyrics were made some four or five years ago but seems like it was made yesterday.


Brßulio is the man! He is my generation. The lyrics are about the planet thawing and really quickly at that. There are theories, scientifically proven, which say that sea levels will rise in the next 10 years by around 3 meters. That means that cities, below sea levels, like Rio de Janeiro ¢ Rio suburbs and the city of Recife will disappear! Brßulio wrote lyrics with a chorus which says exactly that ō I came to build my castle, on the hills over there, where 100 years from now will be at the waterÆs edgeö He was really generous giving us a few more yearsģI wanted a sort of hip-hop with a spoken text. He sent it along ¢ quite a long text and we honed it down to something we use in the song.


The lyrics are concise and direct. There is a lot said with just a few words. It is perhaps the most serious of the tracks. It was recording live and in one take. When we were listening to the sound, Arnaldo was with us and put some great stuff into the text. It was at a pause towards the end when there is no more sound. It was fantastic because he put his mark on the track and he has a voice that is unmistakable.


The lyrics are by Carlos Renn¾. HeÆs quite poetically verbose ¢ and writes a lot. He sent me an enormous text! - I then chose those bits and pieces that were about what we were doing. The brass section who put together the arrangement are the same people who were with us for two years on the road when we were doing acoustic MTV. And it has PLAP. At the same time I was putting together this album I was working on another ¢ producing Pedro Luis e A Parede. As this track has a street feel - itÆs sort of primal, I thought I would do it with them.


ItÆs quite an intimate song. Dudu is an old time partner of mine, and one of the guys in IvanÆs group of friends. This track is about the filters you build when dealing with life and you have to deal with the things that interest you. ItÆs part of a slew of work that is quite intimate- something from within. There arenÆt that many sound elements. The recording was great ¢ we used a vibraphone. ItÆs like itÆs all electronic but it doesnÆt actually utilize anything electronic. It was all recorded analogically.


It was looking at where I keep fragments of music thatÆs needs finishing. Paulinho Pinheiro had sent me some really cool stuff; lyrics that sound like classics. And I wanted to take the traditional and give it a new set of clothes ¢ suitable for this new setting. On this track, I called Carlos N·±ez to join us and play his mouth organ¢ because I thought the sound of this instrument gave the music a kind of dryness the track needed. The Quinteto were not supposed to be on this track but I thought the introduction should have an added element, to work the new with the traditional. It works.


10. Excesso Exceto (Lenine / Arnaldo Antunes)
Arnaldo Antunes is a hard-to-get partner which is why we have not collaborated on much together. On this album, we joined forces on two tracks. I have a huge admiration for him ¢ he is one of the great thinkers of this country. And we also have China from Recife, who is one fine talented man and a great musician; a guy who really high on life and on stage just riveting.
11.ContinuańŃo (Lenine)


When I wrote this I never imagined that it would become a song one day. It was just a poem and had this Phoneme piece ōO p¾, O p¾stumo, a possessŃo. A prķ, a prece, procissŃoö. When I was composing the music, I saw this text. And I thought to myself :ōThis is a quartet for kidsö because it ends with ōAmor, a morte a continuańŃoö and I wanted to do that with my kids who arenÆt really kids anymoreģand itÆs great to go into the studio and see them. JoŃo is a music teacher, Bruno is a little younger, has his own studio and studies music at the University of Rio de Janeiro. Bernardo, who is the youngest just loves basketball and is a great player and is really a team-player. IÆve seen the boys singing together and I tell you. ItÆs an emotional moment.