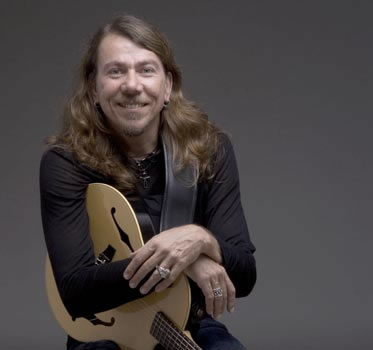 People say that my music combines music manifestations from Brasil and other parts of the world. Sounds that do not fit into a single genre, that do not know limits. I agree. At least, it is what I try to do!

I came to Rio de Janeiro at the end of the 70's, beginning of the 80's. At that time we had very few music venues or resources in Recife. Rio meant a possible or probable growth.

I lived with some friends, composers, who are my partners till today. For a while, we used to share an apartment in Urca, later a small house in Botafogo, famous for having been home to Macalé and Sônia Braga. Afterwards, we moved to Santa Tereza. Everybody still together, composing, creating, trying to survive at a time when our sound was a mixture of regional music with MPB (Brazilian Popular Music) and the market only welcomed rock music. It was not easy, but it certainly was very important to what I do today.

I am fortunate to have been recorded by many talents that permeate all types of sound. Elba Ramalho was the first to record a song of mine, and later came Fernanda Abreu, O Rappa, Milton Nascimento, Maria Rita, Maria Bethânia and many others who confirmed that my true vocation is composing.

I love producing. As I always produce my own CDs, I was invited to work with some friends. I produced Maria Rita's "Segundo", Chico Cesar's "De uns tempos pra ca", "Lonji" by Cabo Verde singer and composer Tcheka, and "Ponto Enredo" by Pedro Luis e a Parede.

I love new challenges and I have always been a fan of the dance group O Corpo. It was very nice to write the sound track of the ballet "Breu" and to see my music in three dimensions for the first time. I haveve worked in TV with directors that I admire deeply, such as Guel Arraes and Jorge Furtado. For them, I was musical director of "Caramuru - the invention of Brazil" that later became a film. I also had the honor of being the musical director of "Cambaio", a musical by Joao and Adriana Falcao, based on songs by Chico Buarque and Edu Lobo.

Of all my CDs, I would choose "Olho de Peixe" as the most important of my career, because it made me discover that music could take me anywhere.

This is what I have been doing so far, and what I plan to keep on doing for a long time.