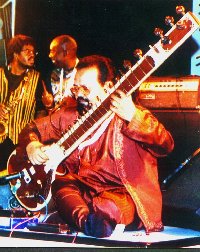 
"Ever since I was a kid, I never saw myself' as a Trinidadian musician alone. I see myself' as a world musician and my kids as world musicians. I see the world as our home and not Trinidad alone. Trinidad is my rock: it is my gate: it is the place where I belong to, but my music and whatever God has given to me here is not for Trinidad alone, it is for the world." Mungal Mungal Patasar was born in 1948, into a home full of music in Trinidad. He came from a large family who did not have much money. Both his parents were singers and his father sang classical Indian music and his brothers were drummers and singers. By the age of eight, Patasar was playing harmonium, dholak and dhantal and played clarinet in his school's military band. He then learnt to play the mandolin on his own with a book and became one of the top mandolin players in the country. After leaving school, Mungal joined the civil service, working first at the Post Office and then went on to being a teacher until 1989. He then did a years course in Public Health and went on to spending twenty odd years in Public Health. He chose this field because he wanted the flexibility of a job where he could be free and not tied down in an office. Mungal got his first sitar at age twenty-seven and practised for eight years secretly before coming out public. In 1978, he participated in the Mastana Bahar competition and received the first prize. Up to then, he was playing only strict classical Indian music. In 1979, he began to turn to Indo Calypso-Jazz.
At 40 he went to India to pursue his studies in sitar at the Banaras Hindu University. India was a whole new experience for Mungal, and achieved several academic degrees. Mungal when not playing sitar is Director or the Caribbean School or Music, Deputy Director or Culture at the Ministry or Culture and Gender Affairs. He is also father/ guru to his daughter who is also an excellent, classical sitar player.