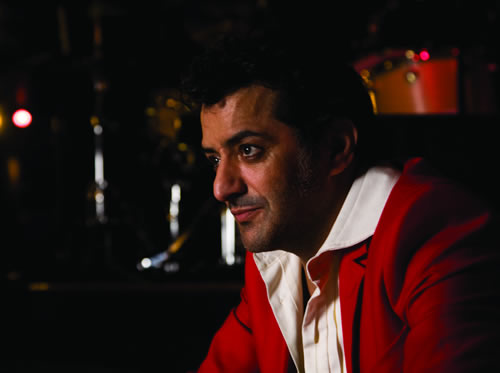 Biography from the Tekitoi release

"Who are you?" "Who am I?" It sounds like there's an existential storm broiling deep inside the soul of France's number 1 musical upsetter. 'Tekitoi?', the title of the latest in a long line of probing, provocative and highly original Rachid Taha releases, is punchy piece of French street lingo whose tone actually says something more like "Who the hell are you?". If Taha is feeling the need to ask himself and others the most basic questions, then at least he's doing it with all the verve and vivacity of a straight-jabbing southpaw boxer.

But that's the man all over. Some strange mutation in the Taha gene over forty-six years ago created a phenomenon as rare as as an albino tiger; a musician of Arabic origin with the courage, intelligence and insight to speak the truth as he sees it, loud and direct, without the softening comforts of metaphor, parable or nostalgia. Or perhaps this uniqueness can be put down to the simple fact that music hit Taha, and vice versa, in the first few years of the 1980s, a period when rock'n'roll still meant rebellion rather than dollars, and when young North African immigrants and sons of immigrants living in France were beginning to shake off decades of timidity with their very own equivalent of America's Black Pride movement. Rather than retreating into the false security of the immigrant ghetto, Taha took the first of many leaps into blackness by leaving the home of his Algerian parents in the picturesque eastern French countryside and moving to Lyon. A factory job was inevitable, but the impulse to set up a club with his mates in order to provide an alternative to the city's established and often overtly racist nitespots definitely wasn't. There, at 'Les Refoules' ('The Frustrated'), Taha hit the decks and span everything from Oum Khalthoum to Kraftwerk, with salvos of The Clash, Led Zep, Neil Young and Johnny Cash mixed in between. It was a musical education to die for and when Taha formed his first band 'Carte de Sejour' ('Green Card'), it was soon clear to everyone who was awake at the time that a completely new voice had arrived on the scene, one that had very little to do with the cabaret rebellion of Algerian rai music, and everything to do with pure rock'n'roll energy and defiance.

Since then Rachid Taha has gone solo and never looked back. Looking back is the quickest way to dusty death in his book. His twenty-two year collaboration with the English producer Steve Hillage has created a whole canon of innovative, powerful and enduring songs which jostle rock, electronic and North African influences in the service of honesty and risk. 'Voila Voila' was like a national wake up call to the growing tide of racism in France. The album 'Ole Ole' was a head-on collision between the sounds of the Maghreb and techno culture, and its cover, depicting a peroxide blue-eyed Taha, was a perfect piece of social and sexual disorientation. 'Diwan' was an homage to the Arabic and North African stars of yesteryear and a skilfull job of musical restoration crowned by the hit 'Ya Rayah', which rode the charts in France and far off places like Lebanon and Colombia. '1-2-3 Soleil', the live recording of Taha's epoch-making encounter with rai rulers Khaled and Faudel at the Bercy stadium in Paris in 1998, was a million seller which hoisted the name of Rachid Taha overground in one neat strike. 'Made In Medina' heralded a new maturity as well as a new obsession with the dark and gathering storm clouds on society's horizons.

It has taken three years of hard touring to show 'Made in Medina' to the world, with a global trail of both prestigious and eccentric gigs: Istanbul, Mexico City, Saigon, Phnom Penh, Adelaide, WOMAD festivals here and there. During those nomadic years a new album was already brewing. "I dreamed of singing my nightmares," says Taha. The apocalyptic vision of a society careering into a wall was the impetus for a marathon of questioning; his motives, other people's motives, the dirty victory of experience over innocence, the root causes of the virulent anger and chaos that grips our world. That's what makes 'Tekitoi' Taha's most harrowing and yet fascinating album to date. And in the midst of it all there's 'Rock El Casbah', an homage to the late great Joe Strummer, a man’s whose unvarnished honesty and lack of text-book punk cynicism made him hero, to Taha and to many others. Let's face it, there's always something to celebrate, even in the darkest hour.