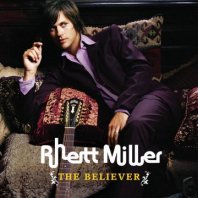 "The songs on The Believer are about sex, war, love and death . . . but mostly sex," Rhett Miller says of his new album. "Before going into the studio, I thought I’d be making a punk rock Ziggy Stardust, but I wound up with George Gershwin does T.Rex's The Slider."

The Believer ranges from the rock punch of "My Valentine" and "Ain't That Strange" to the expansive art-pop textures of "Brand New Way" and "Meteor Shower." "Help Me Suzanne," "I'm with Her" and "Fireflies" — the latter a duet with Rachael Yamagata — demonstrate Miller’s ability to write poignant, pointed love songs whose depth and insight are matched by their tunefulness. The spare, thoughtful "Question" finds Miller revisiting an Old 97's favourite from an older-and-wiser perspective. The album’s one cover is a buoyant, barbed reading of "I Believe She's Lying," written by frequent Miller collaborator Jon Brion.

"I thought that with George Drakoulias I'd end up making a straight-up rock record," the artist continues. "But the night before we started pre-production, George came and saw me play a solo gig at Largo, and I did what I normally do, thrashing around and breaking guitar strings. The next day, George told me that his vision for the recording was that I would be Frank Sinatra, that I would be surrounded by the greatest musicians and I could give myself up to that process."