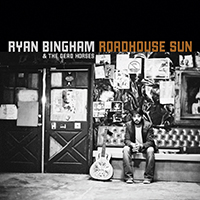 Produced, like its predecessor, by one-time Black Crowes guitarist Marc Ford, Road House Sun manages to capture a feel that’s rootsy without being retro. That has a lot to do with the singer’s preternaturally wizened voice – which Bingham laughingly attributes to “Too many nights in the whiskey house” – not to mention Ford’s approach behind the board,” which Bingham describes as “really old school. Those guitar tones and basslines, Marc knew how to get those down. He wanted to do it the way they used to do it”.

That’s evident in the swampy stomp of the turbulent opener “Day Is Done”, as well as the Stones-gone-to-Lubbock “Tell My Mother I Miss Her So”, a song that grew out of Bingham’s attempts to deal with the death of his own mother, with whom he says he had a “scattered” relationship. Even two years ago, the tune might’ve been tinged with angst, but on Road House Sun, it’s honest but loving, a decidedly adult assessment of Bingham’s situation – a phrase that could be used to describe each of its dozen pieces. “I think when I was younger, I had more of a grudge against society”, he offers. “I grew up poor and I grew up angry about it. But at some point, you realize you can’t just be pissed off – you have to try to do something positive, and this record is my way of doing that.”