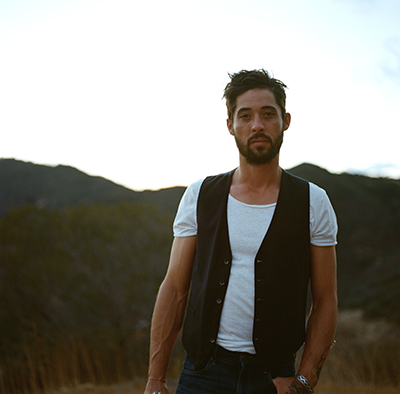 FEAR AND SATURDAY NIGHT'
Out Now

Ryan Bingham has spent most of his life on the road, first on the rough-and-tumble rodeo circuit, then moving from town to town on the equally volatile roadhouse musical circuit. Those travels have given him plenty of material to draw from - and plenty of reason to stop for a moment to dig in his heels and take a stand.

That's exactly what the Texas-bred troubadour does on his second Lost Highway album, Road House Sun, a hardscrabble collection that's at once unblinkingly personal and unapologetically political - the latter a new and bracingly vivid addition to Bingham's palette. The expanded consciousness bursts to the surface of several cuts on Road House Sun - nowhere more movingly than on "Dylan's Hard Rain", a stark look into the darker corners of an America in which the storm its namesake sang of has blown through.

"With all that's happened politically and economically in the last couple of years, I felt like there was a lot to say", explains the 28-year-old singer-songwriter. "As a young person, I felt like it was time to get involved, to write something that wasn't just about Saturday nights in bars. And as far as Dylan? Things that were happening back then are still happening. Things keep repeating themselves".

Road House Sun showcases Bingham's flair for cutting a listener to the quick with slashing, blues-inflected guitar leads that'd do Lone Star forebears like Lightnin' Hopkins proud - his approach on the steely "Endless Ways" - and then offering a balm of bucolic melody, like that of the soaring "Bluebird". He and his road-tested band stretch out most intriguingly, however, on the epic "Change Is", seven minutes of meditative, hypnotic riffing that builds to a near-psychedelic crescendo as Bingham spins his tale of empowerment and responsibility.

"In some ways, I'd gotten burned out on the straight-ahead country scene", he says. "Because I wear a cowboy hat, people assume we're just this honky-tonk band, and we're not. I want to be seen as a versatile artist who draws on a lot of different things and tells a lot of different stories".

They're tough stories, to be sure, but Bingham has come by them honestly. He's lived on his own since his mid-teens, when circumstances and substance abuse tore apart his nuclear family. Rather than get sucked into the system that's destroyed so many adolescents, he took a road far less traveled - riding bulls on the highly-competitive rodeo circuit around the Midwest and southwest. It was on these long hauls that Bingham was able to get in touch with his musical muse, taking things public one night at a bar in Stephenville, Texas. "A bunch of friends asked me to play a couple songs for them. I went out and got my guitar and the owner said 'you oughta come on in and play now and then'", he recalls. "So I did -- I started playing every Wednesday night and people started showing up to hear me play -- it was pretty much an accident, I guess". That 'accident' /i> led Bingham to offer up a passel of self-released, no-budget CDs like 2005's Wishbone Saloon.

The tunes contained on those fueled many a barroom jukebox and earned the attention of folks like Texas legend Terry Allen (who dubbed him "the legitimate heir to the hard traveling deep knowing likes of Woody Guthrie and Hank Williams".) and Joe Ely (who marveled that "his stories plant an uppercut to the gut and give a hint that truth is on the run"). The accolades intensified with the release of his Lost Highway bow, Mescalito, which earned raves in The Washington Post, Esquire and Black Book, which noted "Bingham forces you to hang on his every word". Bingham was also the subject of an extensive Los Angeles Times "Arts & Music, Calendar" section cover story, which lead to his network television debut on The Tonight Show with Jay Leno and a performance on Late Night With Conan O'Brien shortly after. In 2009, Ryan appeared on the acclaimed PBS series Austin City Limits with a 30-minute set that featured the first television performances of "Snake Eyes" and "Tell My Mother I Miss Her So" from Road House Sun.