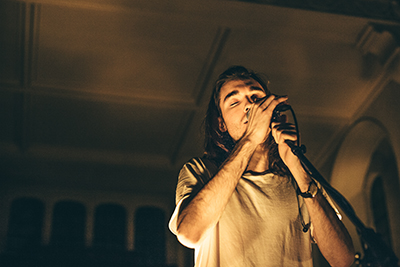 Tom the Lion is an enigma. Unafraid to experiment, yet with a gift for classic song writing, he might just prove to be one of the UK's singular songwriters, in a lineage of the greats from Nick Drake to Mark Hollis to Thom Yorke.


All of which is a quite a long way from Leamington Spa, where Tom was born and made his initial musical explorations. The first of those were at the piano, on which he took some rather unwilling lessons, and he played some trumpet, under the gaze of his father, who plays jazz saxophone in various bands and works in sound design.

Education arrived on record both from esoteric figureheads, but also from masters of the melodic. "I had quite a strong Jazz influence from my Dad when I was growing up, we'd listen to lots of Miles Davis and Chet Baker. But always alongside more classic songwriters. My mum was a big fan of Rickie Lee Jones and Bob Dylan, and we'd listen to things like Peter Gabriel and Suzanne Vega with my Dad, very melodic songwriters with high production values. So inevitably, those things are reference points somewhere."

Much closer to home, inspiration turned out to be just across the street. "We lived opposite a notoriously amazing drummer. My dad knew about him, but they didn't really know each other. My parents were always saying I should be a drummer, because they felt some sort of rhythm in me, and eventually dad organised a drum lesson with this guy, when I was about 13. I was literally hooked from that point on, I was completely mad about drumming."

That signaled Tom's introduction to the road, playing drums in bands from the age of 15 and looking up to stellar session men like Steve Gadd. "That was when I realised that perhaps it wasn't about being one of those top session guys," recalls Tom. "It was about trying to make music."

When he left home and moved to London, Tom worked in bars to stay afloat, all the while expanding his sonic exploration. Feedback from friends was always positive, driving him forward, leading to the two EP releases.

Tastemaking Radio 1 DJ Rob Da Bank heard the EPs and invited Tom The Lion to record a session. "I'd never done anything live before, other than lots of drumming, and I hadn't thought that much about it, because it was a bedroom project. So then it was, 'How do I go about trying to make this live?' because obviously it's very different to quietly whispering into a microphone, whilst the neighbours are out. That's when I first started singing properly."