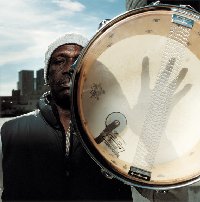 Tony Allen is one of the greatest drummers on the planet - the man who created Afrobeat with Fela Kuti.
24 years after leaving Fela's band he remains a restless and potent trail blazer for new African musical adventures.
Tony Allen's small and wiry frame contrasts with the powerful and transcendent force he radiates. On stage, behind that massive drum kit he's serenely controlling the band. Compulsively watchable, you don't want to miss a beat. 'Sir' Victor Olayia (aka Evil Genius of Highlife) was the man who lit Tony's fuse. His band, the Cool Cats, gigged around Nigeria throughout the 50's in the wake of Mensah Highlife hysteria. He always had an eye for young talent. A certain Fela Ransome Kuti had sung with him for a couple of years, before he left for London to study music. Tony hung out with the Cool Cats and started playing claves. His big chance came when the drummer left and their new leader Sivor Lawson offered him the sticks.
Then in 1964, a guy came round and asked him to come and audition for a Jazz DJ at Nigeria Broadcasting, some cat called Fela Kuti, who was looking for the right drummer for his jazz-highlife band, Koola Lobitos. Fela was just back from 4 years of studying Music Theory and trumpet at Trinty College, London. He'd also got bitten real bad by the jazz bug while he was there. 'That's why he wanted me. After the audition Fela said, 'How come you are the only guy in Nigeria who plays like this - Jazz and Highlife? '
'Fela used to write out the parts for all the musicians in the band (Africa '70). I was the only one who originated the music I played. He tried to write it for me but we both knew it didn't sound so good that way. Fela said I sound like 4 drummers.'
After Tony's departure from the band in the mid 70's he joined an all drummer show with Khofi Ghanaba at National Theatre in Lagos, checking out his roots and then he cut the still compelling No Discrimination album. The '80's saw him playing with King Sunny Ade in London, Ray Lema in Paris and releasing his own Afrobeat gem, NEPA. The '90's saw him working on the dub soaked, future Afrobeat of the Black Voices album for far sighted and hip Comet Records, produced by Doctor L, incendiary DJ and pillar of the Parisian electronica elite. As the new century came round, Tony gave us the deconstructed jazzy Afrobeat of Psycho On Da Bus.