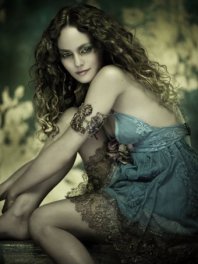 Vanessa Paradis was discovered on the TV show L'Ecole des fans in 1980. She recorded her first single La Magie des surprises-parties in 1985. Although it was not a hit, it paved the way for the song with which she would become internationally famous - "Joe le Taxi" in 1987, while she was still only 14 years old. It topped the charts in France and, unusually for a song sung in French, was released in the UK the following year, where it reached number 3. In 1992, now 19 and working in the U.S. with American rock musician Lenny Kravitz, Paradis began work on a new album sung in English, in which she had become fluent. Written and produced by Kravitz, the album, titled Vanessa Paradis, topped the French chart and briefly made the UK listings (number 45). She has also appeared in several films, most famously "Noce Blanche", for which she won the 1990 Cesar Award for Most Promising Actress.