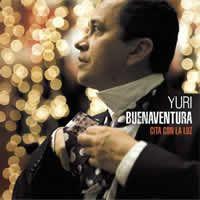 “Cita con la luz” is Yuri Buenaventura’s fifth album in twelve years. This time, the songs breathe tranquility, easing off on the accelerator - more chic than shock, revealing more about himself then he has done in the past.

The album’s twelve tracks (plus a hidden one) were essentially recorded in Yuri’s native Colombia, in Bogota, and, for the first time, Cuba. Much more than just a salsero, Yuri confirms his talent as an all-round singer with styles ranging from jazz to ballad… and even forays into hip-hop and folk, the result of his more audacious partnerships.

Hidden somewhere on this album is a bonus track with a provocative title: 'Los Cobardes (The Cowards)', an incitement to… let go and enjoy a descarga, a Latino jam session. Its ten minutes and builds into a frenzy, led by fiery Cuban drummer Horacio El Negro Hernandez, a postscript to remind us that Yuri Buenaventura’s last album’s “salsa dura” is still part of his heritage.