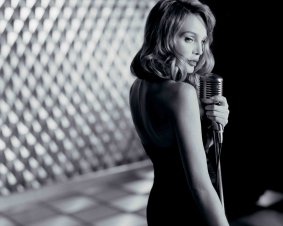 Arielle Dombasle (born Sonnery De Fromental) was born in Connecticut, USA and spent her childhood (her mother died when she was young) in Mexico with her grandfather, the French Ambassador. Her grand parents eventually returned to France where she embarked on a singing and acting career. She has appeared in several Hollywood English-language productions but most of her acting work has been in the French language (over 50 movies). She has also directed and wrote the script for two films, namely Les Pyramides Bleues and Chasse- croise. Arielle Dombasle has also appeared in television movies, notably Lace (1984) and Miami Vice. She is married to the Jewish French philosopher and writer Bernard-Henri Levy. Apart from being a big movie star Arielle Dombasle is also an accomplished singer not only in French but Spanish and English. Her new album Amor Amor, backed by a wonderful orchestra that sounds straight out of yesteryear, includes old pop standards in Spanish and English, yet manages to make them all sound very chic and contemporary! It's the stuff of old hollywood musicals with Arielle's soft and very effeminate French vibrato..