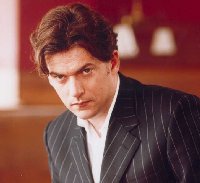 The Bathers project was started in 1987 by Chris Thomson. Since then the band has produced five stunning albums, which give the band a wide appeal both abroad and at home.

Chris Thomson - lead vocal, guitar During his first year of his English literature degree, the allure of being in a band proved irresistible and formed the much revered Friends Again. They were snapped up by Phonogram Records and released several well-received singles and an album. Due to a difference in musical tastes the band split up in 1985 when Chris started the Bathers. He secured a deal with Andy Macdonald's fast-rising Go! Discs and released the album "unusual places to die" in 1987. Political dispute and label politics scuppered the album at release and there was no chance of capitalising on the enthusiastic reception accorded to the record. Chris went back to the drawing board and produced "sweet deceit". The album was released in 1990 by Island and was, again, critically acclaimed. Unfortunately Island entered a period of chaos and sackings and the album was doomed a token release. A flirtation with two key members of Lloyd Cole and the Commotions followed in the form of the Bloomsday album "Fortuny". The bathers then signed to the German label Marina and three fine albums were released - "lagoon blues" (1993), "sunpowder" (1995) and then "kelvingrove baby" (1997) although Chris had a very good relationship with Marina he felt that a label nearer home would be preferable.

Callum McNair - electric guitar Callum was brought up and still lives in Edinburgh. he joined the bathers in 1997 and has been a vital member of the band ever since. he shares co-writing with Chris on 6 of the tracks on pandemonia. Callum plays electric guitar and also is involved in production with other artists. he quotes captain Beafheart, Jimmy Hendrix and the Beatles as his main influences. compositions include the silent scream soundtrack (David Hayman movie, which won a silver bear award at the Berlin film festival). He played with the band the syndicate which had a well received album released on emi. he has shared writing and co-production with Howie b. Currently he is writing for and co-producing an up and coming Edinburgh artist "philly" and has just signed a major publishing deal with EMI Music Publishing Callum is Chris' right hand man in the band.

Hazel Morrison - drums and vocals Hazel is the band's drummer and hers is the beautiful voice that can be heard in live performance and on kelvingrove baby & pandemonia. Born 26 years ago in Edinburgh hazel has always had a love for music and was educated under the then Lothian region specialist music scheme. she graduated from rsamd in drums and percussion and has worked with Evelyn Gllennie. Hazel has played with swelling meg (whose lead singer and cellist features on the new Arab Strap album) and has appeared on Pebble Mill and at T in the park in 1996. she has been a full member of the bathers for 5 or 6 years. She teaches drum and percussion to school children in Midlothian as her day job.