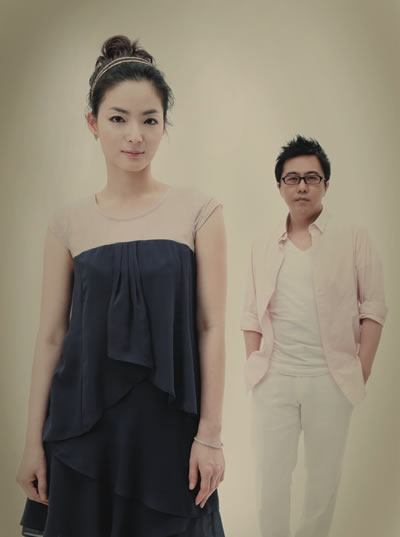 The debut album from Winterplay in the UK, 'Songs of Coloured Love' is available now.

WINTERPLAY is a Korean pop-jazz group,comprised of vocalist Haewon and Juhan Lee (trumpet, composition and producer), with bassist Eunkyu So and guitarist Saza-Woojoon Choi as supporting members.

In late November 2007, Juhan Lee, one of the leading sound creators in the Korean music scene, who is also famous for his smash hit album production 'Nouveau Son' (2004), called upon the members to form this band. With the release of 1st album titled 'CHOCO SNOWBALL,' WINTERPLAY quickly became one of the hottest artist among Korean music scene, leading them to sign as exclusive artist of FLUXUS MUSIC in January 2008. FLUXUS MUSIC is often sited as 'Korean Luxury Label' which leads the Korean electronica scene with their special unit CLAZZIQUAI PROJECT, and is the powerhouse to establish new movements in the Korean pop music.

WINTERPLAY's first album 'CHOCO SNOWBALL' topped the Hanteo (Korean Billboard) Jazz Chart right after its release. No other jazz band has achieved such splendid chart action, and their first solo concert in March was sold out, packed with 400 audiences. Just five months later, they came out with their first hit song 'Happy Bubble'. It was originally made for a Samsung washing machine advert 'Hauzen' in Korea, and later released as a digital single. The national exposure and the popularity of the song to all ages, elevated their popularity enormously, and the song has been signed again for the same commercial, currently playing for a continuous 10 months as a TVC Music. Thus, WINTERPLAY gained wide popularity among Korean audiences by playing many concert venues and by having their music featured on Korean dramas and TV commercials. Most recently, their music is featured on the Korean hit movie titled 'National Hero'.

Juhan mentions that this band is aiming to create 'music of comfortable length, a simple but catchy melody with a touch of jazz, a passionate and sensual sound without drums and keys, and a jazz sound which is atypical of the old school sound.' One critic acclaimed them as 'reviving the good old days when jazz was considered as leading pop music.'

In 2008, WINTERPLAY signed with Universal Classics & Jazz Japan for worldwide distribution. They made their major debut with the album 'Songs of Colored Love' in July, with Japan leading the worldwide release. The title track is an English cover of a Japanese pop group (EGO-WRAPPIN) hit tune. It has continuously aired on Japanese nationwide FM stations, as well as topping the Top Song of iTunes Japan Jazz chart.

The busy schedule has not stopped WINTERPLAY from releasing an 11 song collection summer special album titled 'Hot Summerplay' for Korean market in July of this year. It topped all the Korean Jazz charts from the first week of its release. In addition, the cut, 'Billie Jean' (cover on Michael Jackson's classic) from 'Hot Summerplay', was released in August as a digital-exclusive single in Japan. That digital single topped the 'Top Song' of iTunes Japan Jazz chart the very next day of its release.

WINTERPLAY is expecting to make their Europe debut through Universal Music Group International shortly. It shall not take long for listeners around the world to be fascinated with the acoustic-and-organic jazzy sound creation of this unique pop-jazz group.

It was Haewon's dream to become a vocalist since the age of 12. After entering Dankook University, she heard Ella Fitzgerald's "Too Darn Hot" which enchanted Haewon to jazz. While still in college, she developed her own unique learning method to pronounce and sing songs in English. For one who has never been abroad, with her first airplane trip last year to Japan, many find it unbelievable, but her hard work has paid off. She took every chance she could get to experience singing in famous jazz clubs.

Haewon sang 'Don de Voy' in the movie 'Don de Voy (love charm)', and appeared as a guest singer for Gentle Rain Concert (2006), participated in the National World Sound Festival (2006), followed by appearances at the EBS SPACE TV Concert for the Sonagi Project (2007) and participating on their album 'Cinema in Jazz' earlier that year. It was at the 'Boss Nova Live Show' Concert (2007) and the EBS SPACE TV Concert New Jazz Stars 8, where Juhan noticed the talented vocal works of Haewon. It wasn't long after, that Juhan persuaded her to form the team WINTERPLAY.

Juhan has visited various countries from his childhood thanks to his father being a diplomat. He started to play trumpet in the elementary school band in Iran. After 2 years, he was in a Latin Funk Band called 'Thalamus', in Suriname, enjoying live performances and his first studio recording for 2 tracks.

Juhan graduated with a Mechanical Engineering Degree at the University of Washington under the encouragement of his father, however could not abandon his passion as a trumpet player. Soon after arriving in Korea in 1993, after a 27 year absence, his musical talents was soon appreciated by the market, and found himself playing for many famous Korean artists and movie soundtracks. He has been appreciated as 'the little giant' and has continuously tried to promote young Korean jazz musicians. In 1998, he formed JAAK in order to activate the Korean jazz scene.

Juhan participated in concerts with/and creating music for Korean top artists. In addition, he has worked on the soundtrack of numerous films. He has appeared at two of Korea's largest jazz festivals, the Jarasum International Jazz Festival and the Uljin Jazz Festival, not only as a performer, but also as a total concert producer.